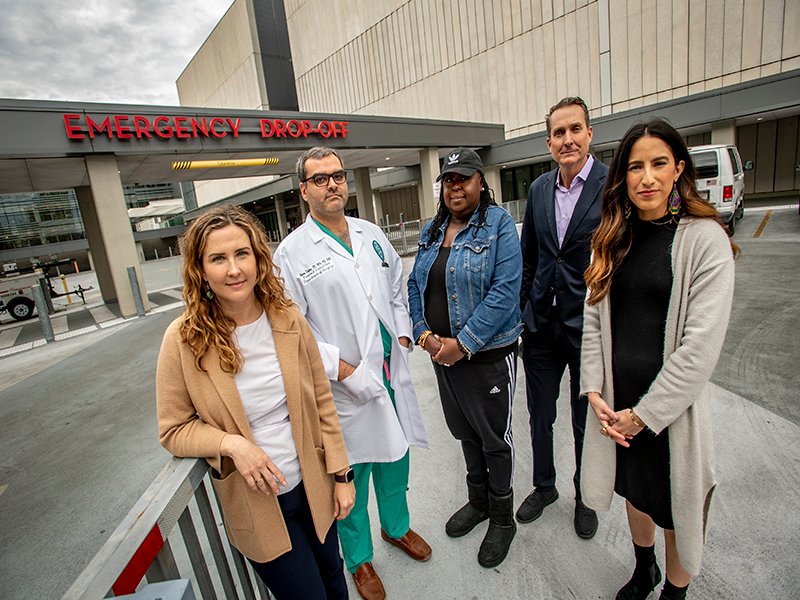 One of the Center for Youth Equity’s two core projects will target youth aged 18-30 who have been victims of gun violence trauma. The project will use motivational interviewing techniques to encourage behavior change and reduce gun violence.

The project is led by principal investigators Dr. Julia Fleckman, research core director for the center and an assistant professor in the Department of Social Behavioral and Population Sciences, and Dr. Joseph Constans, an adjunct research professor in the Departments of Social Behavioral and Population Sciences (SPHTM) and Psychiatry and Behavioral Sciences (School of Medicine).

Under the program, victims who present with gunshot injury at the Trauma Recovery Center at University Medical Center will be approached by a social worker employed by the Center for Youth Equity to offer participation in the program. Researchers believe that trauma victims could be more receptive to messages around changing high risk behaviors after they themselves have been the subject of harm.

“The reasons why people have gotten to that place, some of those key structural and social determinants might have put them there to begin with,” says Fleckman, referring to determinants like poverty, structural racism, access to educational resources and job training, job opportunities, quality housing, mental health and mental health services, and access to financial support. The highest rate of gun-related injury and death are primarily amongst young men of color, she says.

“Carrying a gun at all times, being employed in the drug industry, and hanging out with dangerous networks” are all also known risks for gun violence, adds Constans.

Motivational interviewing was developed initially as a technique for engaging substance abusers in treatment and promoting change in behaviors associated with use. The technique addresses patients “where they are” and guides them toward the next step along the continuum instead of leaping to the end result immediately. The initial intervention might involve securing reliable transportation, assistance with finding housing, or signing up for a job training course, rather than a wholescale lifestyle change. “We can’t address all of those fundamental issues,” says Fleckman, “but I think we can provide both a way for people to receive some support and to focus on change.”

“We can’t address all of those fundamental issues, but I think we can provide both a way for people to receive some support and to focus on change.”

Participants will be followed for six months, including case management by a social worker and introduction to available programs. “We’re not recreating new interventions, treatments, and social services that are in the community,” says Constans. “We’re just trying to work with the individual in identifying things that they think they might be willing to use and helping them overcome the barriers to utilizing these existing services.

The program builds on a pilot study conducted by Constans and colleagues that was published in the Psychology of Violence in 2017. The pilot study consisted of an initial assessment in the Trauma Center like this project, with follow ups two weeks and up to 12 weeks post-discharge.

Enrollment in this project will also include a firearm safety training class for those who are interested, and all enrollees will receive a firearm lockbox.

“There’s this real culture of needing to be protected,” says Fleckman, but she and her team hope that by providing a safe storage mechanism for firearms “it just might give people a beat to really think about an incident before they take action.”

Researchers will conduct a baseline assessment and an assessment at three and six months, while also collecting community-level data tracking whether the enrollees have been arrested or hospitalized in the years after enrollment.

Fleckman and Constans hope to begin recruiting in June and continue for the next three and a half years. They expect to enroll over 300 people into either the motivational interviewing group or the treatment as usual group. Standard treatment includes a screening and available PTSD treatment, while the enrolled group would have active engagement over the course of six months, although the researchers expect to lose up to half of the initial enrollees over the course of that six-month period.

“There’s a big concern in the community about crime right now, says Constans. “This is not an immediate solution….We expect that if it is beneficial, within a year we’ll be seeing some benefit from it. … It’s a public health approach to this problem, which involves identifying those at risk and offering interventions to those at highest risk.”

The School of Medicine’s Dr. Sharven Taghavi who also serves as a trauma surgeon at UMC will collaborate, along with the City of New Orleans Gun Violence Prevention Program.