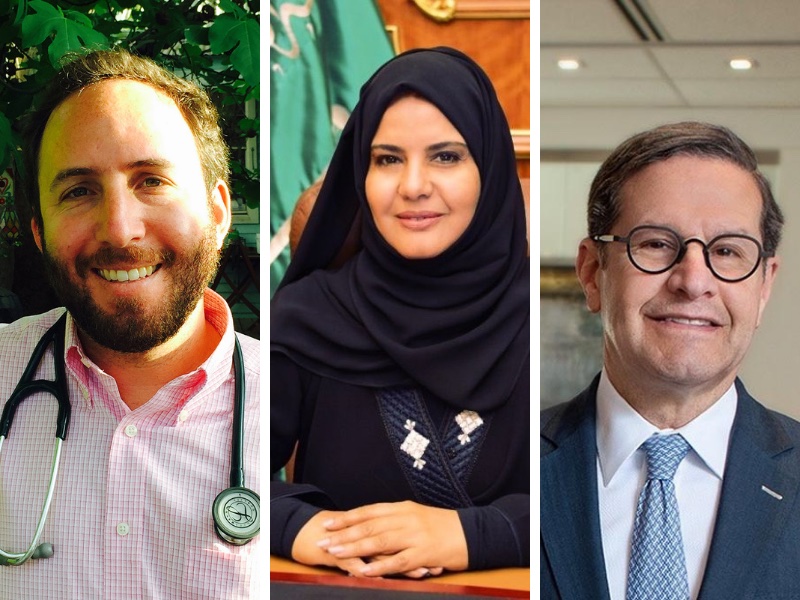 Dr. Joseph Kanter (left), Dr. Hanan al-Ahmadi (center), and Dr. Neil Meltzer will all be honored at the Tulane Alumni Awards on April 9, 2022.

A record three alumni from the Tulane School of Public Health and Tropical Medicine will be honored at the annual Tulane Alumni Awards Gala, to be held on April 9 at the World War II Museum.

Dr. Joseph Kanter (MD/MPH ’10) will be honored with the Lisa Jackson Professional Achievement Award, which recognizes alumni who have distinguished themselves through their personal accomplishments and whose contributions honor the legacy of excellence at Tulane University. Kanter is the state health officer and medical director of the Louisiana Department of Health, a promotion he received during the COVID-19 pandemic. As the top medical professional in the Department of Health, Kanter has been a very visible leader in addressing the pandemic in Louisiana, from mitigation measures to vaccine deployment.

After a residency in emergency medicine at LSU, Kanter served as a clinical emergency physician, medical director of the Health Care for the Homeless clinic, and clinical assistant professor of medicine at both LSU Health Sciences Center and Tulane School of Medicine. He served as director of health for the city of New Orleans and led Mayor Mitch Landrieu’s comprehensive opioid mitigation strategy, increasing availability of medication-assisted treatment, promoting harm reduction services, and initiating a city-wide effort to reduce the stigma of addictive disorders. After his career with the city of New Orleans, he began working at the Louisiana Department of Health, as an assistant state health officer, interim assistant secretary, and regional medical director.

The International Award for Exceptional Achievement will be awarded to Hanan al-Ahmadi (MHA ’89), a Saudi academic who has been a member of the Shura Council (Consultative Assembly of Saudi Arabia) since 2013 and who has served as assistant speaker since October 2020 in the Shura Council. She is the first woman to hold the position and in December 2020, she became the first woman to chair a session of the body. She served on the Economic and Energy Committee, the Health and Environment Affairs Committee, and the Fifth Parliamentary Friendship Committee (with member countries like France, Austria, Belgium, European Parliament, and the NATO). In addition, she was a professor of health services administration and served as the director general of the women's branch of the Institute of Public Administration.  Al-Ahmadi served on the board of trustees of Riyadh Economic Forum and was a ,ember of the Evaluation Committee for King Khalid Award for Excellence for Non-Profit Organizations and was a member of the Scientific Council - Institute of Public Administration. She was also a member of the advisory board for Social Research and Women's Studies at Princess Nora bint Abdul Rahman University. She was also a member of the consulting committee of the Saudi Alzheimer’s Disease Association and is a past assessor of the Sheikh Khalifa Government Excellence Program in the UAE. Additionally, she was a member of the preparatory committee for national dialogue on health services at the King Abdulaziz Center for National Dialogue.

Neil Meltzer (MHA ’81), president and CEO of LifeBridge Health, will receive the Tulane School of Public Health and Tropical Medicine Award. As CEO of LifeBridge Health, Meltzer has led the system through a period of strategic growth with a mission to transform the organization into an integrated healthcare delivery system, offering a full spectrum of care. Along with the acquisition of Carroll Hospital in 2015 and Grace Medical Center in 2019, he has expanded the system through key partnerships, including alliances with organizations that provide medical transportation, retail pharmacy, urgent care, health insurance, assisted living, and more.

He joined Sinai Hospital of Baltimore as vice president of operations in 1988 and a decade later became Sinai’s president and chief operating officer. On the national level, he continues to work with the American Heart Association after serving as national chairman. He was also one of 15 national workforce health care champions appointed by former president, Barack Obama. In 2022, Meltzer was appointed to the Advisory Panel on Outreach and Education, a federal healthcare advisory committee to the Centers for Medicare & Medicaid Services.

Tickets to the black tie optional gala are available online.