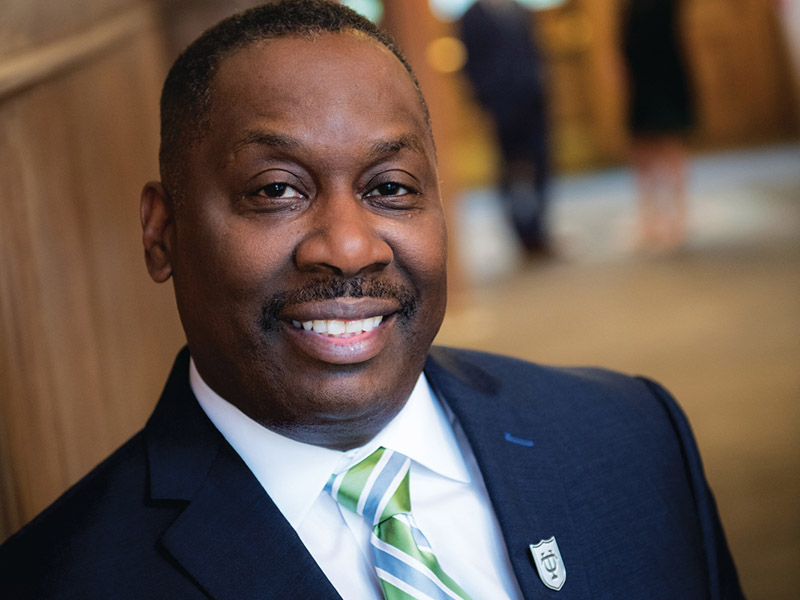 Dr. Thomas A. LaVeist has been honored by the Association of American Medical Colleges (AAMC) with the prestigious Herbert W. Nickens Award. The award was presented at the association’s annual meeting, Learn Serve Lead, held in Nashville, Tenn, in October, 2022.

The Nickens Award is given to an individual who has made outstanding contributions to promoting justice in medical education and health care equity in the United States. Dr. Herbert W. Nickens was the founding vice president of the AAMC Division of Community and Minority Programs, now Equity, Diversity, & Inclusion. Nickens’ passionate leadership contributed greatly to focusing national attention on the need to support underrepresented racial and ethnic minorities in medicine.

LaVeist is dean of the Tulane School of Public Health and Tropical Medicine in New Orleans. He has been a prominent national leader on the topic of health inequities, particularly seeking to shed light on the social and behavioral factors that explain race differences in health outcomes. The work has led LaVeist to produce a documentary, called The Skin You’re In, and establish a multi-media campaign exploring health injustice in the face of COVID-19. LaVeist has been a fervent voice in national media calling attention to this issue and was named as a co-chair of the Louisiana COVID-19 Health Equity Task Force by Louisiana Governor John Bel Edwards. He has also led an effort among Black members of the National Academy of Medicine to urge Black Americans to get the vaccine when it became available.

LaVeist holds a doctorate in medical sociology from the University of Michigan and is an elected member of the prestigious National Academy of Medicine. He has published more than 130 articles in scientific journals, focusing on the social and behavioral factors that impact health outcomes, and has engaged in these issues through lectures and articles in major media.

According to the AAMC, nurturing and supporting the aspirations of underrepresented racial and ethnic minorities was a driving factor in Nickens’ efforts to increase the diversity of the physician workforce. Nickens served as the director of the Office of Policy, Planning and Analysis at the National Institute on Aging, part of the National Institutes of Health (NIH) and was deputy chief of the Center on Aging of the National Institute of Mental Health at NIH. He also served as the first director of the Office of Minority Health, Health at the U.S. Department of Health and Human Services. In 1989, the AAMC created the Division of Minority Health, Education and Prevention and select Nickens to lead the division.

The AAMC established the Herbert W. Nickens Award in 2000 to honor the late Dr. Nickens and his lifelong concerns about the educational, societal, and health care needs of racial and ethnic minorities. Nickens believed that a multidisciplinary approach is needed to address inequities in health, and because of that, nominees for award come from a wide range of fields, including medicine, dentistry, education, law, nursing, pharmacy, public health, and social and behavioral sciences.